The Yellow-billed Loon is one of the signature bird species of the high latitudes. Breeding exclusively in the arctic, across Alaska and Canada in North America, it’s the biggest Loon, highly territorial and exceptionally handsome. 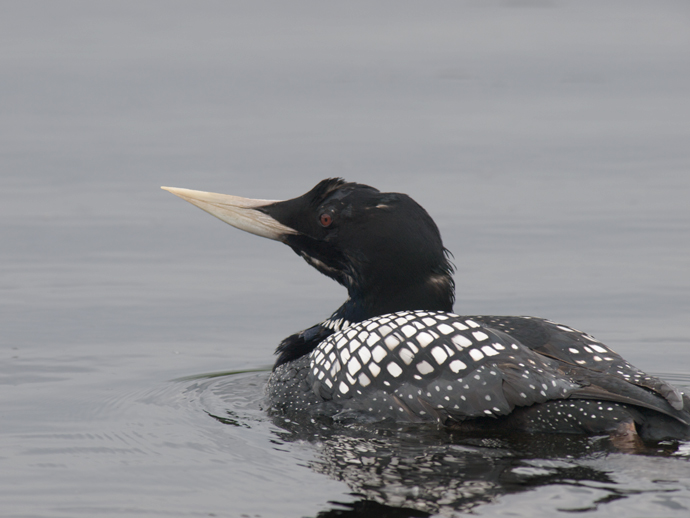 It’s also a poster child for the global impact of humankind of the planet. Because Yellow-billed Loons, which in the course of their lives are never near historic mercury sources, are nonetheless testing for quite high levels of mercury in their bodies. Because they breed in very remote areas, winter off-shore and there aren’t very many of them, they haven’t been extensively researched. But some recent science reports dismaying news: Yellow-billed Loons, quintessential creatures of the relative pristine Arctic, carry dangerously high levels of mercury.

A recent article in Waterbirds Journal by David C. Evers et al. describes sampling the blood, feathers and egg shells from 115 Yellow-billed Loons and testing them for levels of organic mercury. While there is little data on “safe” levels of mercury in Yellow-billed Loons, there have been a lot of studies of mercury levels in their cousins, Common Loons. According to Evers, “Based on Common Loon studies, significant risk of reduced reproductive success generally occurs [in Common Loons] when adult Hg concentrations exceed 2.0 µg/g wet weight (WW) in blood, 20.0 µg/g fresh weight (FW) in flight feathers and 1.0 µg/g WW in eggs.”

Yellow-billed Loons are an apex predator; they are near the top of the food chain. Very small amounts of organic mercury in water are increasingly concentrated as you move up the food chain.  Evers found,

Contemporary mercury concentrations for 176 total samples (across all study sites for 115 Yellow-billed Loons) ranged from 0.08 to 1.45 µg/g ww in blood, 3.0 to 24.9 µg/g fw in feathers and 0.21 to 1.23 µg/g ww in eggs. Mercury concentrations in blood, feather and egg tissues indicate that some individual Yellow-billed Loons in breeding populations across North America are at risk of lowered productivity resulting from Hg exposure.

So where is the organic mercury originating?

Mostly from coal-fired power plants  in Asia. Coal contains .08 to .24 parts per million (PPM) mercury. That doesn’t sound like much, but humankind burns 14,416 million tons of coal a year. At an average of .12 PPM, that means 173 tons of mercury were sent into the atmosphere. Bacteria and other organic processes turn that mercury into the even more dangerous organic mercury, chiefly methylmercury. The process of biomagnification does the rest, with each step up the food chain increasing the level of organic mercury present.

So much for “Clean Coal.”