Idaho, especially the southern two-thirds of the state, is a poster child for the effects of volcanoes on a landscape. For the last 17 million years or so, pretty much everything volcanoes can do to the countryside has been done to WC’s new home state.1

Up until about 17 million years ago, more or less, Idaho was going about the business of continental accretion. For the preceding 35 million years or so, plate tectnoics was stitching on to the edge of the continent – beginning about at the Idaho-Montana line – chunks of islands, microplates and other geologic detritus that rafted in across the Pacific. Gradually, the Pacific shore moved west, near its current location.

And then figurative hell broke loose. First, massive lava vents opened and one of the three or four largest discharges of lava in history occurred. Most of eastern Washington, eastern Oregon, northern Nevada and Western Idaho were buried, in some places to a depth of more than 5,000 feet, in lava. The lava flows of the Columbia River Flood Basalts extended down the Columbia Gorge, all the way to coastal Oregon, creating Yaquina Head, a distance of some 500 miles. The evidence is that the Ginko Flow, the episode that created Yaquina Head, traveled those 500 miles in 7-10 days. 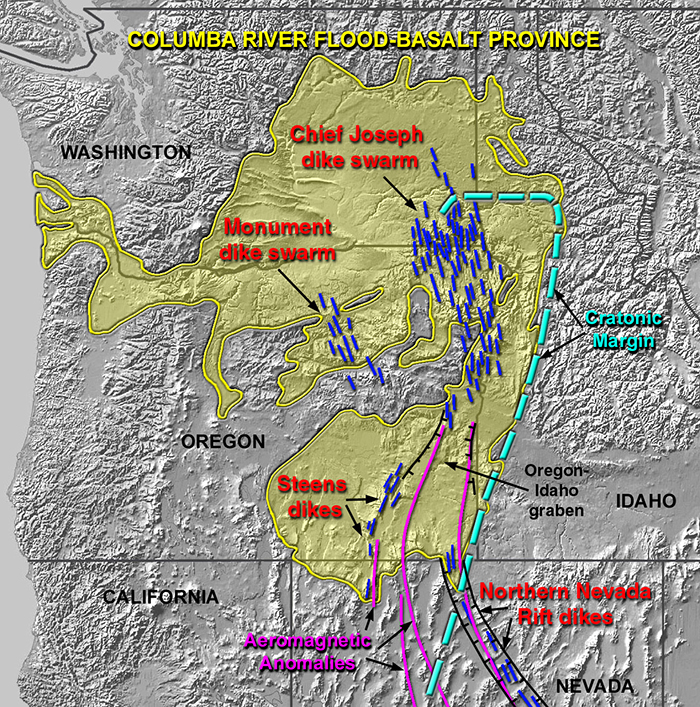 The Columbia River Basalt Group (including the Steen and Picture Gorge basalts) extends over portions of five states. Victor Camp and Martin Ross, via WikiCommons

Over some 2 million years, in four major episodes, much the Pacific Northwest was buried up to its hips in lava. Geology is still trying to figure out why; much of the evidence is buried under thousands of feet of basalt.

The second volcanic event, or possibly the next episode in the same event, was the Yellowstone Hot Spot. A plume of white-hot rock played against the underside of North America. It first arose under southeastern Oregon and, as the North American continent trended westerly as a result of plate tectonics, the geologic blowtorch appeared to move east, searing the southern third of Oregon to northwest Wyoming over the course of 10-13 million years. The result is the Snake River Plain, the geologic footprint of the hot spot. It’s a mass of basalt, ash, the welded ash called tuft and other volcanic products. Unlike the highly liquid lava from the Columbia River Basalt events, the volcanism of the Yellowstone Hot Spot was from a series explosive craters, called recurrent calderas. 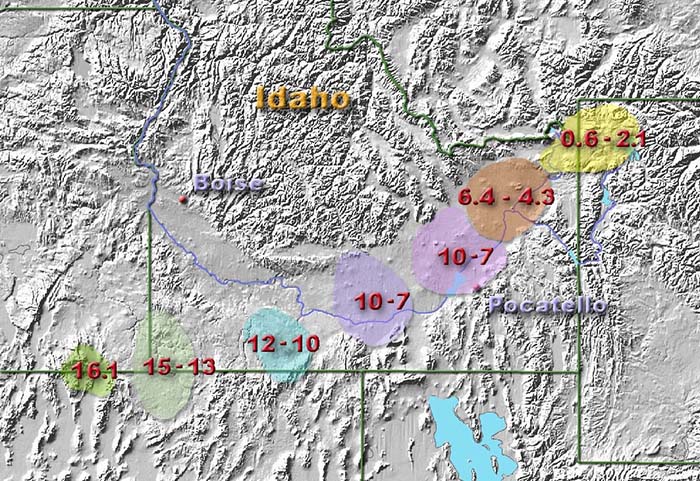 Past locations of the hotspot in millions of years. Kelvin Case via WikiCommons

As you track the volcanics east, they get progressively younger, until you reach the place where Wyoming, Idaho and Montana intersect, present-day Yellowstone National Park. There, it happened the geologic equivalent of yesterday. These volcanoes not only laid lava all over the Snake River Plain; they also blasted unimaginable amounts of ash into the atmosphere. Hundreds of times. All across the West.

The third volcanic event may or may not be related to the first two. A wide band of the western United States, extending from southern Arizona and Mexico to central Idaho, is tearing itself apart. It’s as if someone were stretching North America, pulling from the the Washington Cascades and southwestern New Mexico. The result of that stretching is the Basin and Range Province. The result, basin and range topography, is characterized by abrupt changes in elevation, alternating between narrow faulted mountain chains and flat arid valleys or basins. That same stretching has thinned the continental crust, and in many places volcanism is the result. Idaho’s Craters of the Moon are an example of basin and range-induced volcanism. In the scale of the migration of the Yellowstone Hot Spot and the Columbia River Basalt flows, Craters of the Moon are tiny, but still cover some 800 square miles. Craters of the Moon is one of the largest recent lava flows; eruptions have occured there in the last 2,000 years. Geologists disagree on what is causing the Basin and Rage Province.

The results of some 17 million years of volcanism is that you cannot travel far in Idaho without seeing volcanic artifacts. Those might range from hot springs – Idaho has the most hot springs of any of the 50 states – and volcanic ash, columnar basalt walls in stream cuts and, at least along much of the Snake River Plain, a fairly boring topography. Even much of the more interesting bits are related to volcanism; the deeply carved Salmon River Mountains in central Idaho are in the Idaho Batholith, a huge granite mass. In a lot of ways, those kinds of gigantic granite domes are failed volcanos; the liquid rock didn’t make it to the surface but cooled underground instead.

The non-volcanic geology is mostly buried. Idaho does have other geology to offer, especially in the central portion of the state and up on the Panhandle. But volcanism, and the long history of volcanism, dominates.