The Anchorage Daily News, without any sense of irony, ran two stories in its October 8 edition that are a fine demonstration of Alaska working at cross-purposes to itself.

First there was the Washington Post story on the recalculation of the rate of climate change. The report makes clear that the truly catastrophic changes from man-caused climate change will begin as soon as 2040, not at the end of the century, as assumed earlier. Coastal flooding, increased severe heat events, increasingly severe flooding, ocean acidification; the whole miserable planet-altering mess will happen unless there is heroic – and increasingly unlikely – regulation of carbon emissions immediately. The United States, the second largest emitter of CO2 and largest per capita – last year renounced the Paris Accord, the effort to limit CO2 emissions to 1.5° C. Smart money would be planning on how to cope with a world that looks like this. 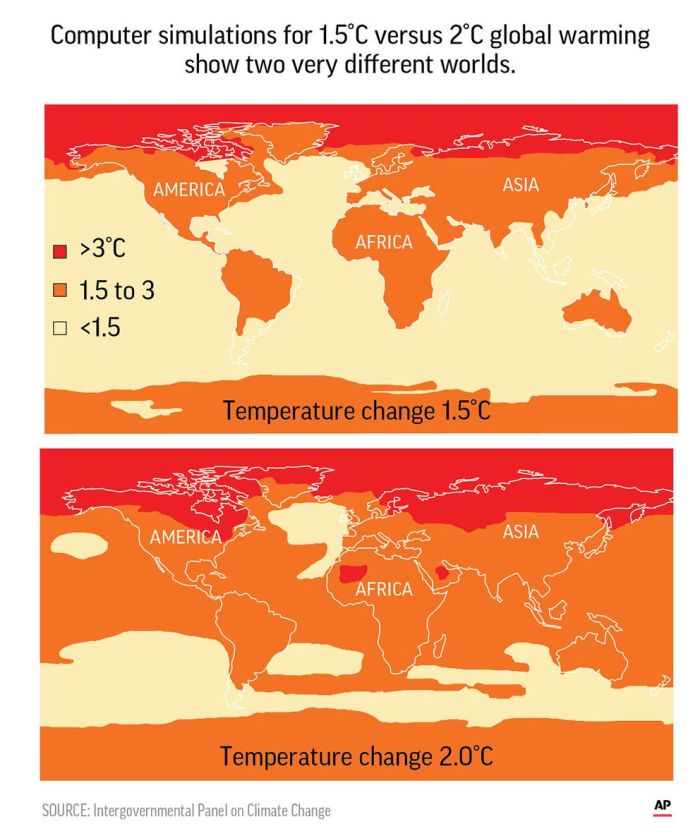 Note that at the 3° C line, Alaska goes beet red, facing more than 3° C of average annual temperature change. WC isn’t saying we shouldn’t try, and try as hard as possible. WC is suggesting that we should also hedge our bets.

The second story was a nice piece on Ilya Benesch’s house in Fairbanks, which is built on some serious permafrost. The article discusses his design attempts that attempt to cope with a soil structure that melts and runs downhill if it gets just a little, tiny bit warmer. Benesch hopes that the combination of deep piling, natural insulation, shade and a little luck will keep that from happening.

But the article doesn’t discuss the impact of accelerated global warming and the magnification of the effect in the sub-arctic.

WC would accuse the Daily News of irony, but the ADN hasn’t intentionally used irony since Howard Weaver left.

You see, the climate projection models are very clear that mankind’s heating of our planet isn’t uniform. A world-wide increase of 2.0° C (about 3.6° F) means Alaska gets heated up by more than 3° C (more than 5.4° F). It’s already started warming. UAF’s Dr. Vladimir E. Ramonovsky has found that even in colder parts of northern Alaska, where the permafrost extended to more than 2,000 feet beneath the ground, temperatures at depths of 65 feet had increased by at least 3.0 degrees Celsius (about 5.5° F) over the past few decades. Near the surface, the changes have been even more pronounced; shallow regions have warmed from -8.0° C to -3.0 ° C. That’s five-eighths of the way to water.

Rick Steiner, back in 2015, called it “addicted to oil.” We still are. There is no plan in Alaska to address that addiction. Even as we destroy the things in Alaska we claim to love. This years crop of gubernatorial candidates all show classic responses to addiction. Dunleavy denies that is a problem. Begich ignores the problem. Walker wants to get us on natural gas instead, the carbon equivalent of methadone, WC supposes.

WC tries to be optimistic. Really. But it’s getting harder. When you are metaphorically burning down your house to keep yourself warm, and don’t see it as a problem, well, it’s hard to be optimistic.

2 thoughts on “Working at Cross Purposes”