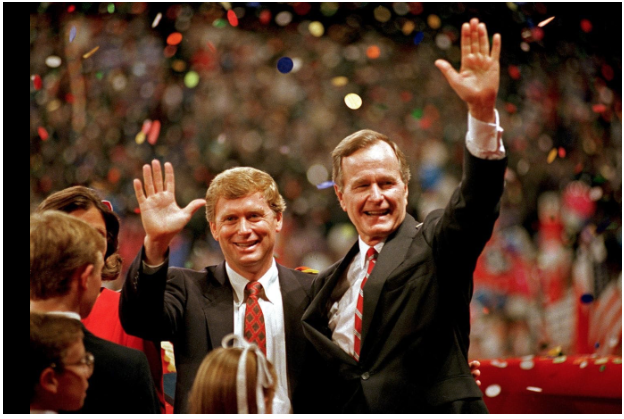 WC agrees that, at least  in comparison to the current Republican president, the late George H. W. Bush was a pretty decent POTUS. But that’s damning with faint praise. And all the praise for his service following his death was largely earned. But it’s also another example of Americans habit of collective amnesia when interring a leader.

That collective amnesia was most vividly on display when we buried Dick Nixon. The focus was overwhelmingly on his positive accomplishments, with rare mention of the demons that led him to resign in disgrace, after ripping the country apart for nearly two years.

Bush’s failures weren’t as egregious, by any means, but WC offers three examples of very serious failures of governance by H.W. to illustrate his point.1

War on Drugs
It was Bush who launched the infamous War on Drugs, with a completely staged national television speech where he displayed a baggie of crack cocaine purchased by an undercover cop from 18-year old Keith Jackson, in Lafayette Square, behind the White House. It was a setup; the DEA had to give Jackson directions to get to the sale. Juries refused to convict Jackson – twice. But Bush led the charge for harsher sentences for crack cocaine than other forms of the drug. A a result, the War on Drugs was a war on racial minorities, especially African-Americans. Clinton certainly carried that war forward, but it was Bush who started it. When he took office, the DEA budget was $5 billion. When he left office, it was $12 billion. And that doesn’t include the billions invested in “going after drug lords” in Central and South America, destabilizing those governments with consequences we are still living with.

Another consequence for our society is that today among black and Native American adults 63 percent have had a family member in jail or prison for a night or more (compared with 48 percent of Latino and 42 percent of white adults).

It’s hard to remember now – that collective American amnesia again – but AIDS/HIV was a scourge, killing tens of thousands of Americans each year.

President Bush’s tenure was noticeable for its absence of leadership on AIDS, by its opposition to LGBT nondiscrimination and rights, and by its capitulation to the anti-gay forces within the Republican Party The consequences were pretty horrific.

WC isn’t suggesting the President Bush is responsible for those deaths, but by allowing the conversation to be cast as an anti-gay one, by not acting more forcefully, Bush put his political party ahead of human lives. He did sign two pieces of legislation in 1990 to address the crisis: the Americans With Disabilities Act, which to some extent protected people living with HIV and AIDS from being discriminated against, and the Ryan White Comprehensive AIDS Resources Emergency Act, which provided some limited federal funding for HIV/AIDS treatment. But, really, his actions were woefully inadequate to the crisis.2

Read My Lips
Repeatedly in his 1988 presidential campaign, Bush infamously made – repeatedly – the pledge, “Read my lips – no new taxes!” And then enacted a tax increase, which likely cost him reelection. The tax increase was absolutely necessary; Reagan’s failed economic policies had created a financial crisis and increased tax rates were entirely appropriate – and the only solution that would get through the Democrat-controlled Congress. The failure was the pledge, which should never have been made. Of course, it might be that Bush wouldn’t have beaten Dukakis without the pledge. Bush almost certainly wouldn’t have ben elected without the highly deceptive Willie Horton political advertisement.

We’ve had far worse presidents; we certainly have a far worse one now. But George Herbert Walker Bush had his flaws. Nominating him for a kind of political sainthood is inappropriate.3

One thought on “George H.W. Bush: A Modest Dissent”