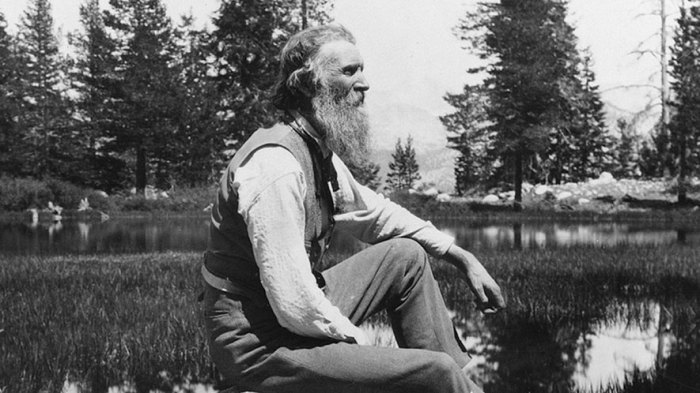 Some years ago now, WC got to tag along when Mrs. WC went to Camp Denali, near the end of the Denali Highway. The purpose of the trip was to set up a bird banding station along Moose Creek, below Camp Denali, for a couple of years. But the owners treated us like paying guests and one evening we got to join the 20 or so guests and listen to the actor Lee Stetson do John Muir.

Stetson performs his shows all over the world, but if you want to really experience it, WC recommends listening and watching in a small log cabin, with a fire going in the wood stove, and you sitting ten feet from the artist, with Denali looming through the window. Muir was a story-teller, a yarn-spinner, a mythlògos. If you’ve read any of his works you know what WC means. Much of Muir’s writing reads as if he is there with you, talking to you. Stetson has taken those writings, scripted them and captures very well the power John Muir brought to everything he did.

WC brings up John Muir because if there is an antipode, a polar opposite to Donald Trump, it would be John Muir.

Muir lived for, loved and championed wilderness; likely his most famous quotation is “The mountains are calling and I must go.” Donald Trump thinks wilderness is the rough on one of his manicured golf courses.

Muir was intensely curious about nature and all things natural. He observed, “When we try to pick out anything by itself, we find it hitched to everything else in the universe.” For Donald Trump, if it isn’t about him, about Donald Trump, he is utterly indifferent.

Trump claims to be religious, and certainly has the embrace of the Christianists, even if he can’t name a Book of the Bible or even quote a verse. The reality is that he worships only Donald Trump. Muir was a deeply spiritual man, and lived the lifestyle. He talked the talk, “I bade adieu to mechanical inventions, determined to devote the rest of my life to the inventions of God.” And, “Climbthe mountains and get their good tidings.”

Muir valued and cherished nature for itself. Trump could care less, unless it can make him money. Muir said of the Donald Trumps of his time, “The world, we are told, was made especially for man – a presumption not supported by all the facts. A numerous class of men are painfully astonished whenever they find anything, living or dead, in all God’s universe, which they cannot eat or render in some way what they call useful to themselves.”

Muir was a keen observer of nature. He wrote, “The dispersal of juniper seeds is effected by the plum and cherry plan of hiring birds at the cost of their board, and this obtaining the use of a pair of extra good wings.” Trump is utterly, completely oblivious to nature. This is a man who surrounds himself with gold plated bathroom fixtures.

If you’ve had enough Trump and would like to sample some Muir, try one of Muir’s stories that Lee Stetson gave us at Camp Denali. Try “Stickeen,” Muir’s story of a little mongrel dog that went adventuring with Muir in Glacier Bay.

What would John Muir think of Donald Trump? Remember he and President Teddy Roosevelt, a Republican, were friends. Perhaps this: ‘The gross heathenism of civilization has generally destroyed nature, and poetry, and all that is spiritual.” Donald Trump certainly qualifies as a “gross heathen.” And he is certainly bent on destruction.

One thought on “What Would John Muir Think?”